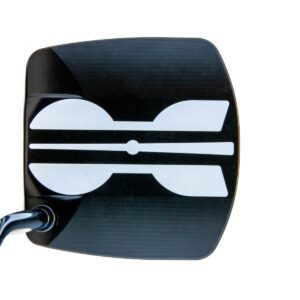 A basic physics calculation will confirm that if you execute a perfect arc, and your putter face remains square to that arc, the end result will be a ball rolling end-over-end, on-line, every time.

Of course, straight-back, straight-through is always an option.  The best way to do that is with a croquet style stroke, which the USGA will never allow.  If you are using a legal straight-back, straight-through stroke, in order to be accurate, you must manipulate your hands and/or stroke to do so.  Many amateurs, and indeed, some pros, do this very well, but it takes a lot of practice, and nerves of steel, to be successful using this method.  The more natural stroke is an arc.

For many years, practice putting arcs have been around to help golfers learn that perfect stroke.  And now, Arcroll Putters has positioned a putting arc right on top of the putter.  Because the putter head is moving throughout the stroke, the arc on the putter is also moving.  And because the arc is moving with the putter, it can be envisioned as a constantly changing DYNAMIC segment of the full arc.  So now the goal is for the golfer to keep the DYNAMIC ARC on its correct path.  The only way to achieve this is to maintain the orientation of that arc.  And if that orientation is maintained, another beautiful thing happens.  Because the putter head is locked into that orientation, the result is a putter face that remains square to the arc throughout the stroke.

So you will know, these putters “Conform with the Rules of Golf” and are legal for tournament play.

Practice or Play with the DYNAMIC ARC

Keep your eye on the DOT

Why not trust in science and watch the DOT on the DYNAMIC ARC as it travels along the arc throughout the stroke?  Especially on short putts.  There is a psychological point to be made here.  Instead of stressing on hitting a perfect straight line that you can imagine, why not watch the DYNAMIC ARC in “real time” which allows you to use a natural arcing motion and forget about the line of the putt, and let science determine the outcome of the stroke?  Try it in practice.  See your stroke progress through the ARC.  The most important part of the stroke is the take away.  If you keep the dot on the ARC, then you know that your putter is in perfect position to continue.  If you miss the ARC, abort the stroke.  It’s that easy to avoid a bad start.  Every stroke becomes repetitive practice.  Who knows?  You may even want to put this method into play.